We happened upon the province of Ha Giang, in the far north of Vietnam, by accident. Andy and I were Couchsurfing in Hanoi and expressed an interest in trekking to our Vietnamese host. We’d heard that Sapa was beautiful but quite touristy and we were keen to find an alternative.

So when she bigged up the countryside near Ha Giang, and described biking around what’s known as the “Dong Van Loop”, we were all ears. At the time, we weren’t sure if we’d be brave enough to rent bikes ourselves but still, we were curious to see this hilly paradise, in an area that’s still relatively untouched by tourism.

We decided to stay in Thon Tha, home to the Tay ethnic group and 6km from Ha Giang city. 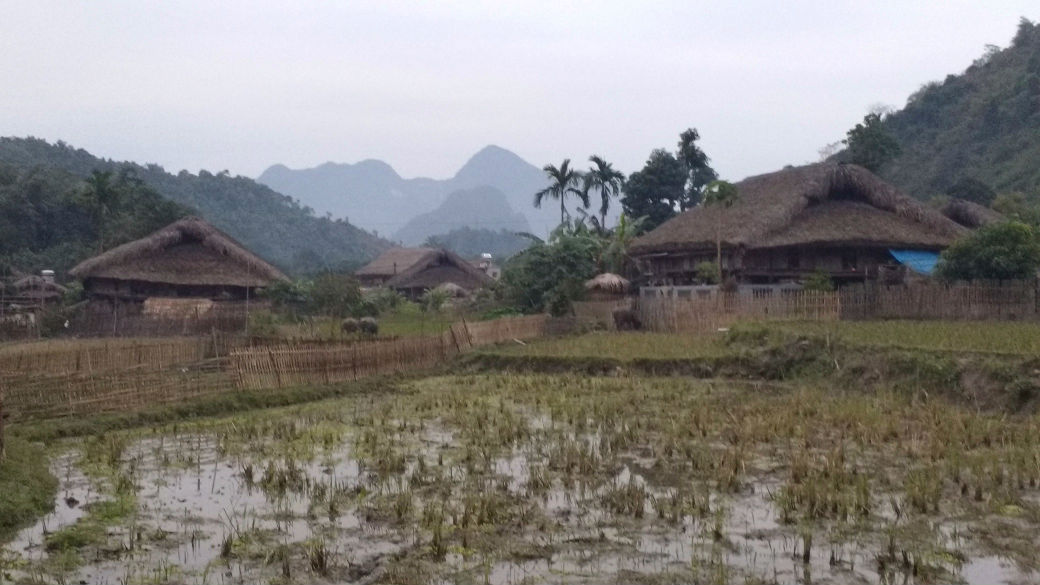 A few enterprising locals are involved in a responsible tourism project and have set up 3 homestays there, with a portion of the profits reinvested in the community. Visiting tourists are given a huge dinner with the family, a simple mattress to sleep on and breakfast the next day. This set-up gives families an additional source of income without them having to leave and find work further afield.

It sounded like a lovely idea in theory – and we were excited to see it in practice.


We ended up staying with the kindly Mr. Thien (who founded Thon Tha’s Responsible Tourism Co-operative) and his ever-smiling wife, Xiang. 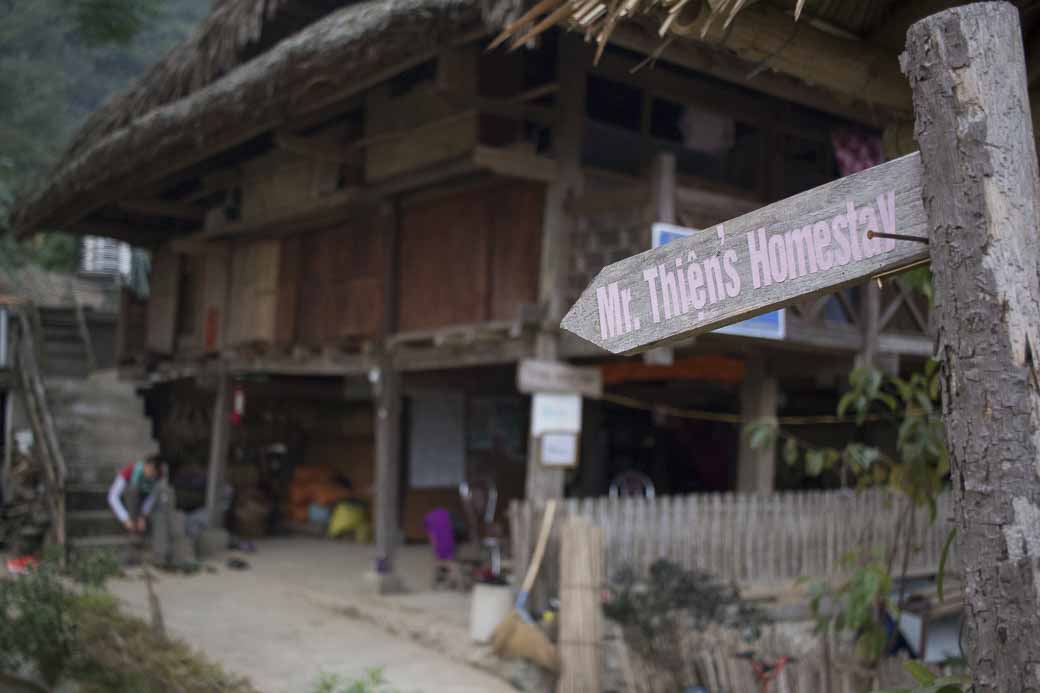 They have a great relationship – for instance, Xiang does all the cooking but Mr. Thien unfailingly takes the credit…and she has no problem in smacking him when he does! This made for a real family atmosphere and we felt right at home. 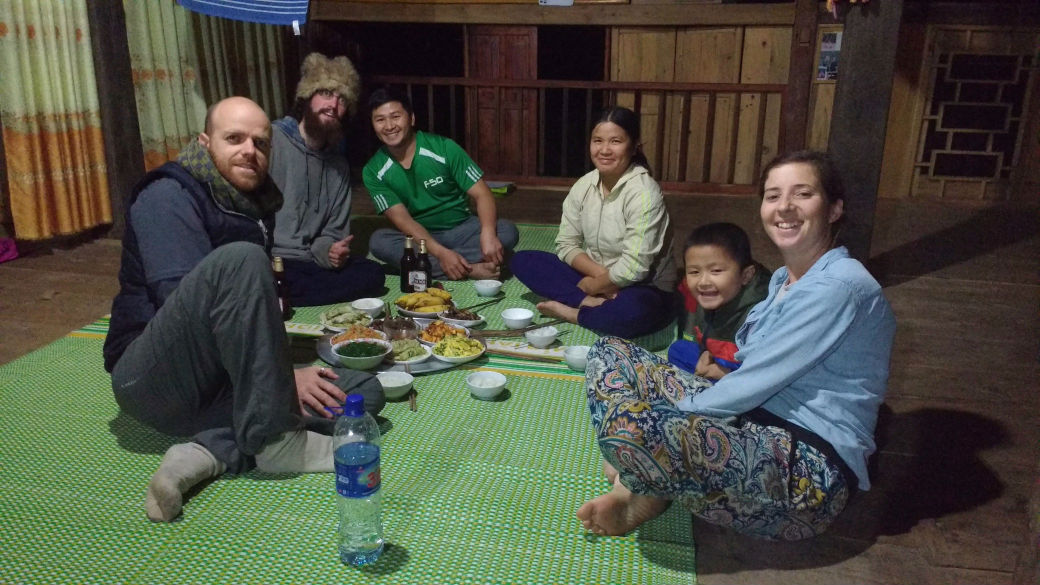 Every evening, we’d sit down to a massive feast – including several obligatory shots of rice wine – and hear the neighbourhood gossip. (There’s usually quite a bit because in Thon Tha, they’re always celebrating something. Whether it’s someone getting married, the purchase of a buffalo or the finshed construction of a house, it always culminates in a 3-day-long party and a scandal of some kind.) 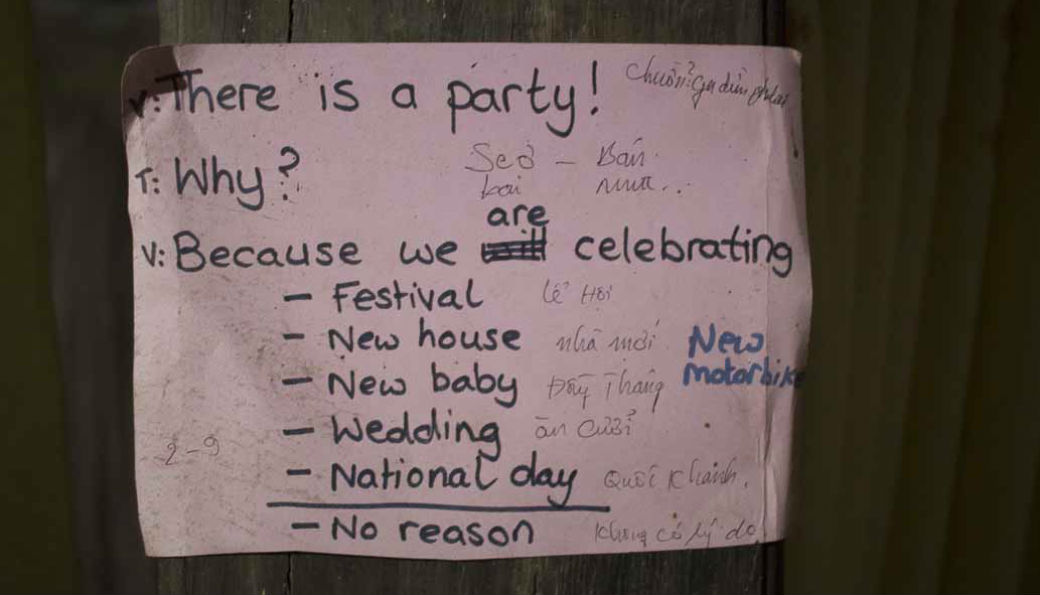 On our first night in Thon Tha, we heard all about driving the loop from Maggie and Robbie – a lovely Irish couple who had volunteered in the village the previous year and were back visiting. It sounded like too good an adventure to pass up so we decided to brave the drive ourselves.

The next day, we rented brand-new semi-automatics from QT Motors, spent a few hours practising around the village and snapped up some attractive biking clothes from the market. 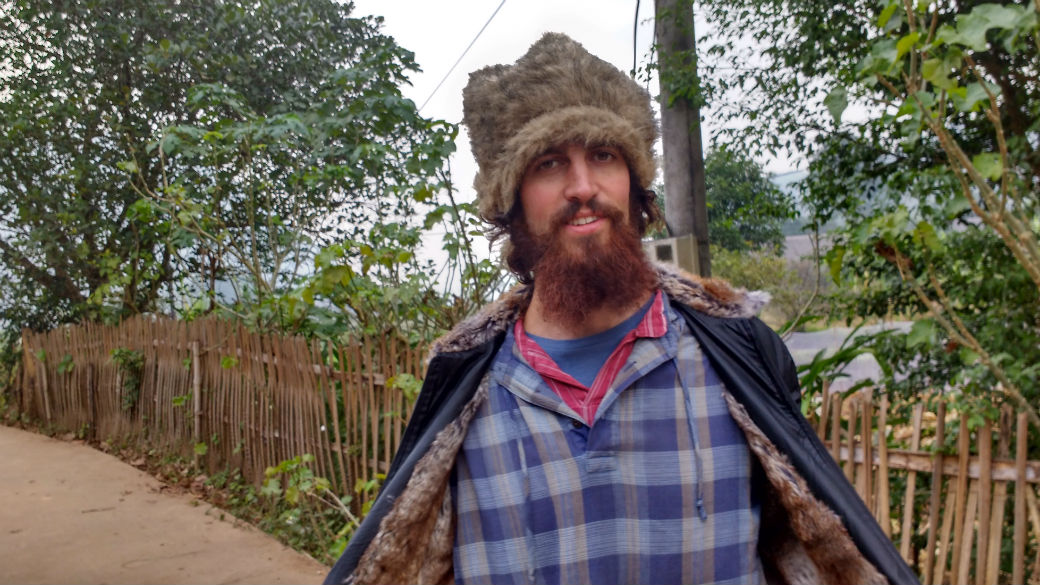 By the following morning, we were raring to go! 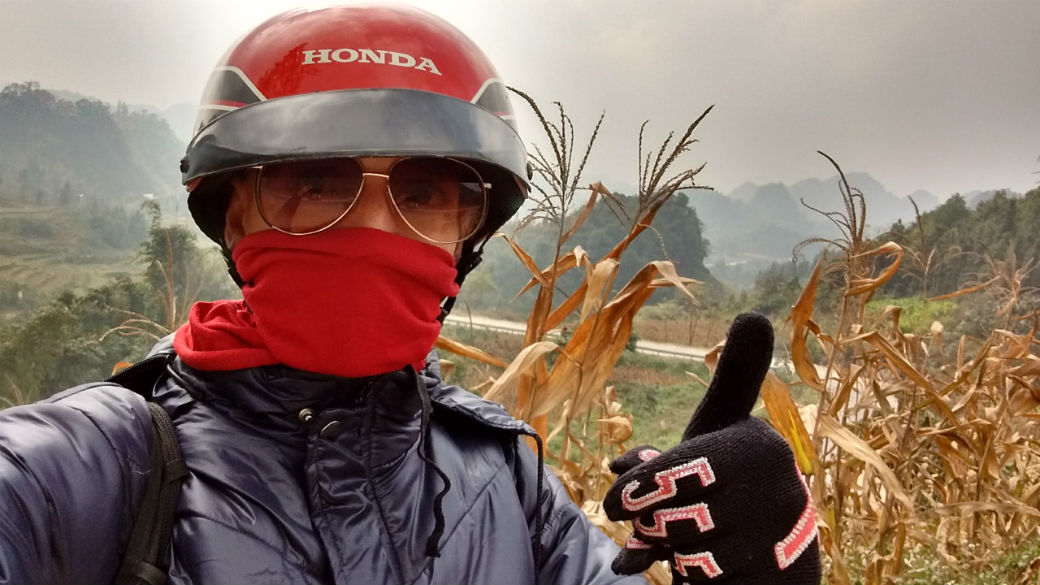 Admittedly, I didn’t get off to the smoothest start – when I tried to park my bike ontop of a family at the morning market. Luckily, no one was hurt.


The next few days on the Dong Van loop formed what many would describe as “a once-in-a-lifetime experience” – although personally, I’ll be doing it again. Bezzing through the most jaw-droppingly beautiful scenery, staying at remote homestays, meeting some amazing people and eating some incredible food along the way…it was a pretty special way to explore the region.

Nice and all as I’m sure it would’ve been in a car, or even on the back of a guide’s bike, nothing quite compares to the thrill and freedom of driving through that scenery yourself. And apart from a few hairy moments with wildly veering trucks (which fly around bends as you cling to the 10 or so cm left over) and the fact that my thumb is probably dented for life from leaning on the horn so much, I loved every second. 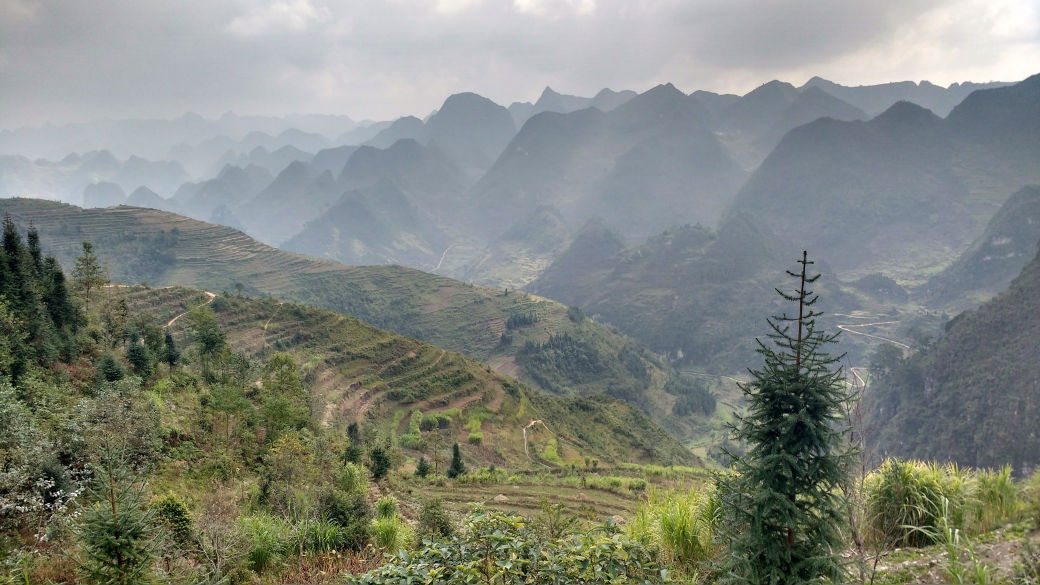 Here’s how we did it…

Fortunately, we got a gentle enough introduction to the loop. This stretch of the journey took about 2.5 hours, along terraced rice paddies and sweet-smelling pine forests, before reaching “Heaven’s Gate” pass (complete with its view of “The Twins”, so-called due to the 2 hills’ resemblance to a woman’s…well, you know). 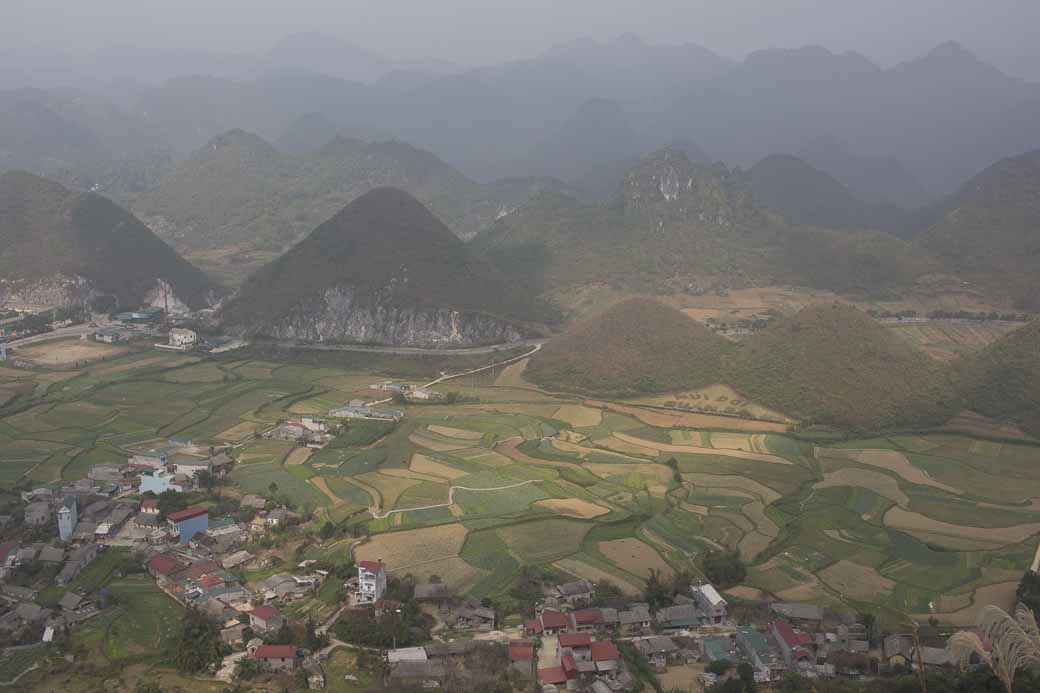 During the drive, we got used to the sudden gear changes, the inevitable horn blaring and the quick reflexes we’d need to avoid manic buses and on which we’d come to depend over the next few days.

At the end of that particular stretch, we ventured just beyond Tam Son to the rural village of Nam Dam, where we were welcomed at Mr. Ly Quoc Thang’s homestay. Once again, the woman of the house ran the show, plying us with food and potent corn wine while she craftily did shots of green tea instead. Smart lady. 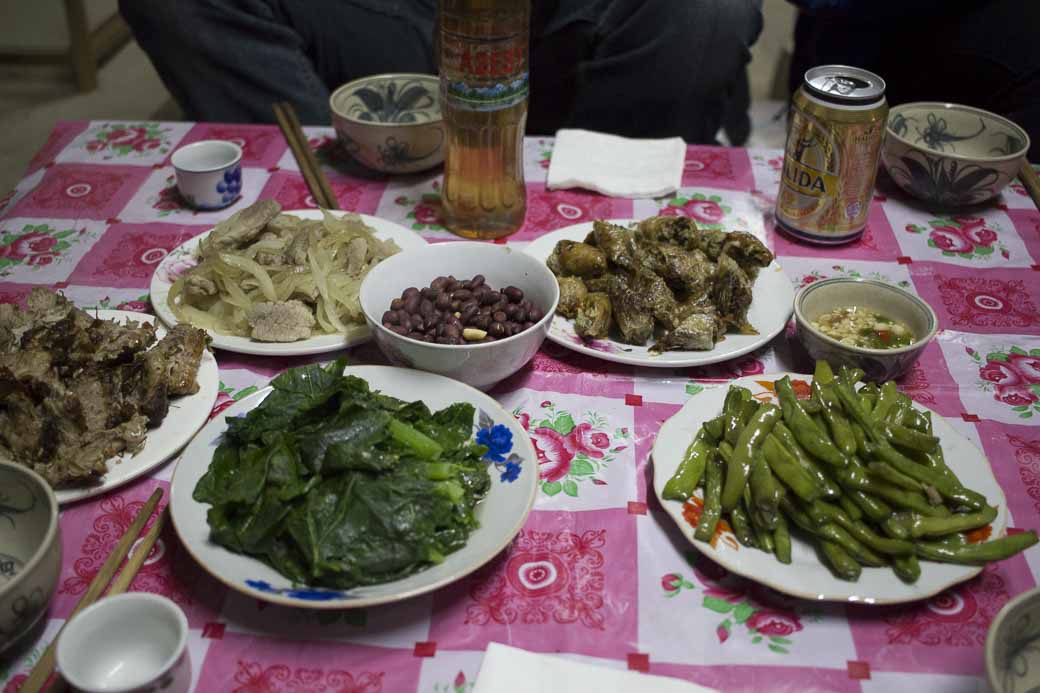 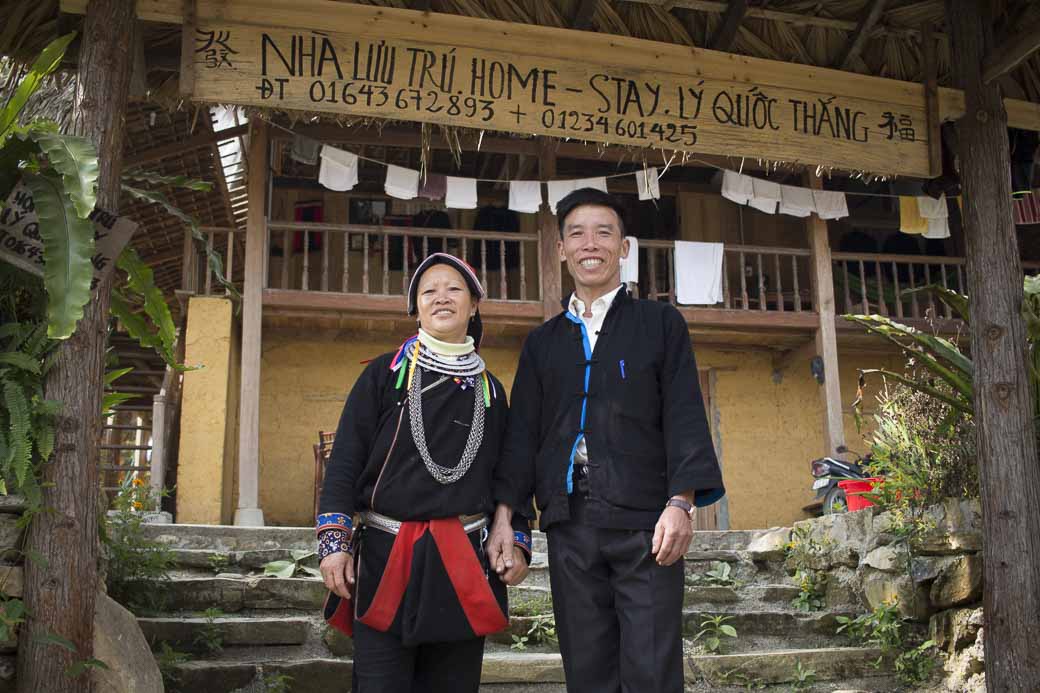 The second day’s journey of 6 hours was a bit more challenging; possibly due to our sore heads from the night before! 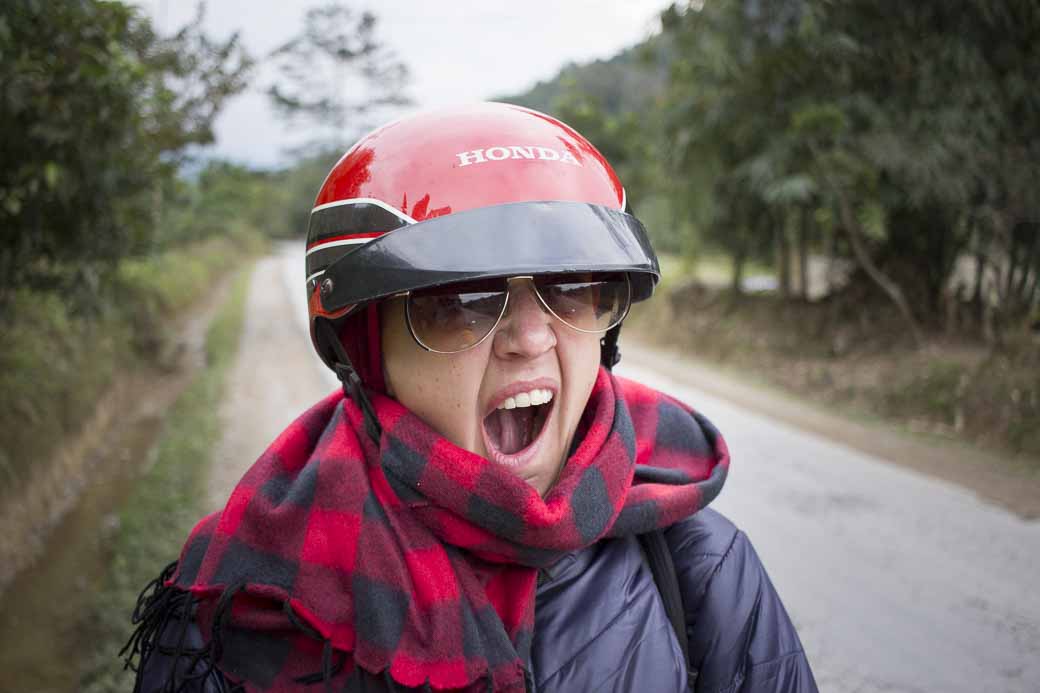 But the scenery was more than worth it. We started off beside what looked like the alpine peaks and crystal-clear rivers of Switzerland, cruised by what resembled gentle Tuscan hills and finished by climbing up bare rock mountains that would rival the most raggedy of Iceland’s peaks.

I couldn’t believe the transformation in the landscape – it seemed like every corner would bring a different, but equally arresting, vision. 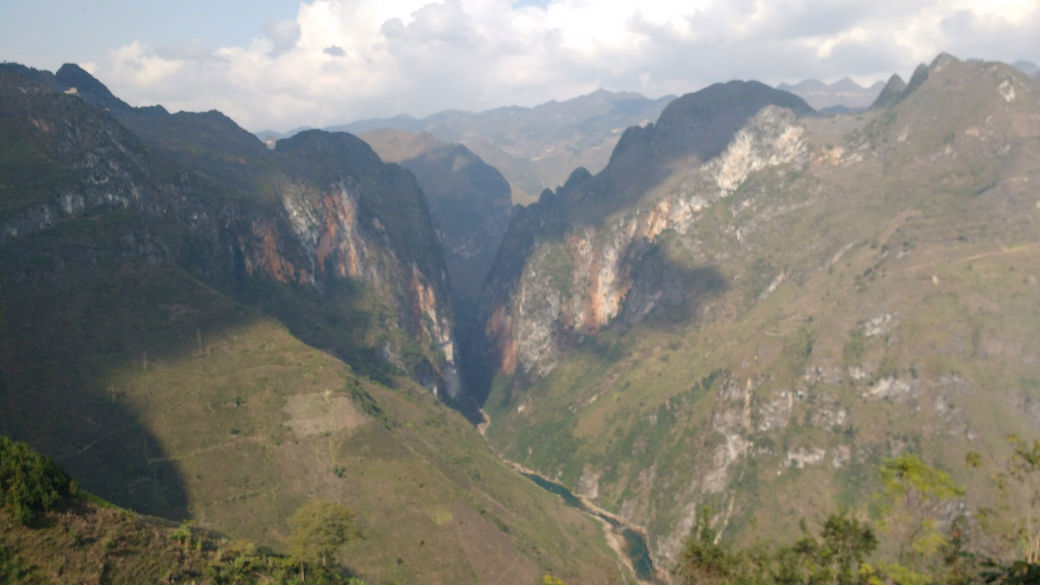 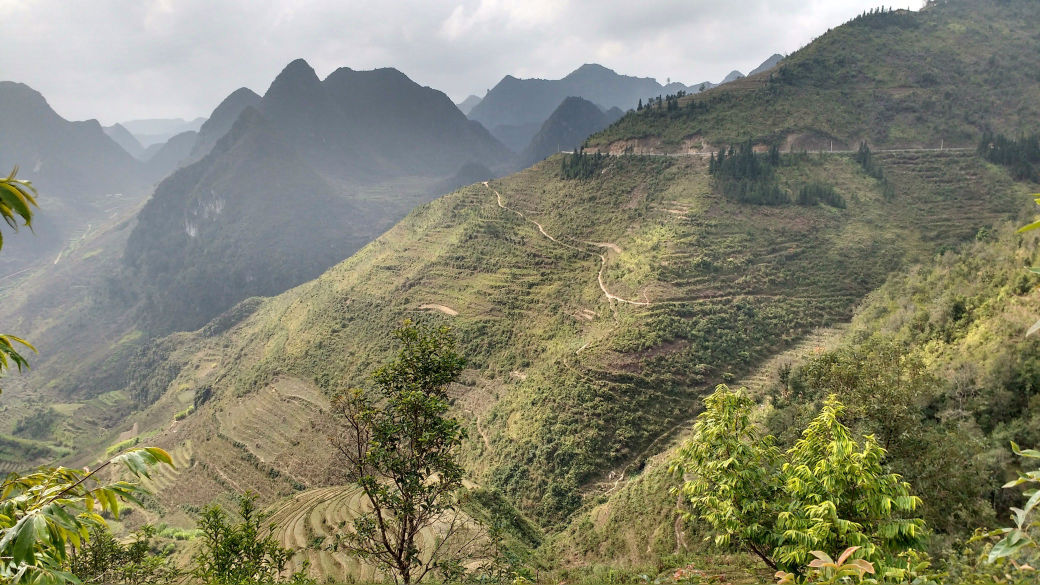 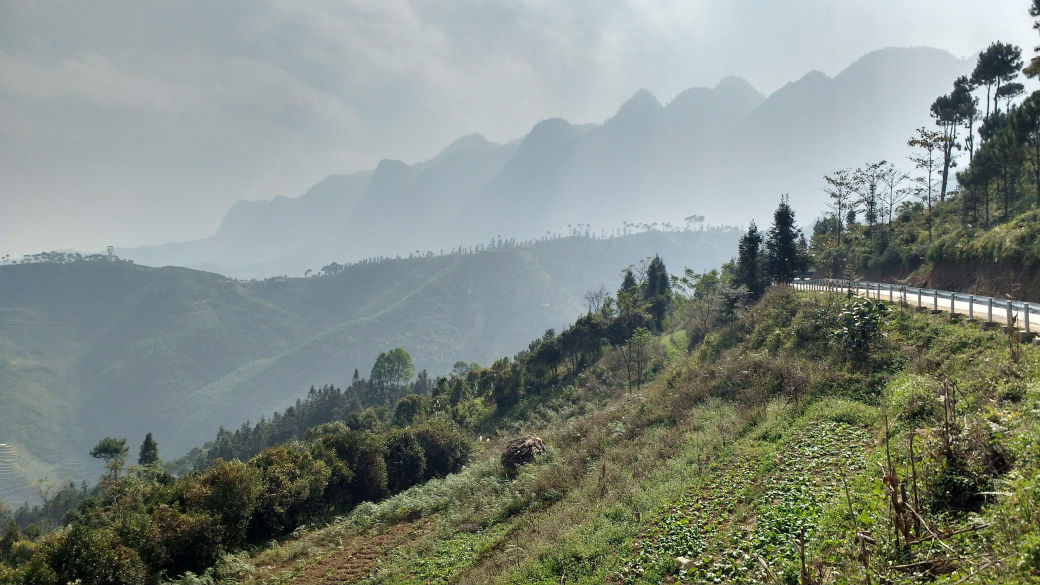 It was a long day though – concentrating against careening trucks and sporadic construction works, not to mention the physically gruelling results of bouncing amongst all those potholes (bum death, anyone?!) But it was spectacular, and we arrived in the quaint town of Dong Van tired but buzzing.

A feast of mountain goat was the perfect end to a memorable day.

Reputed as having the most breathtaking vistas along the loop, this journey did not disappoint. 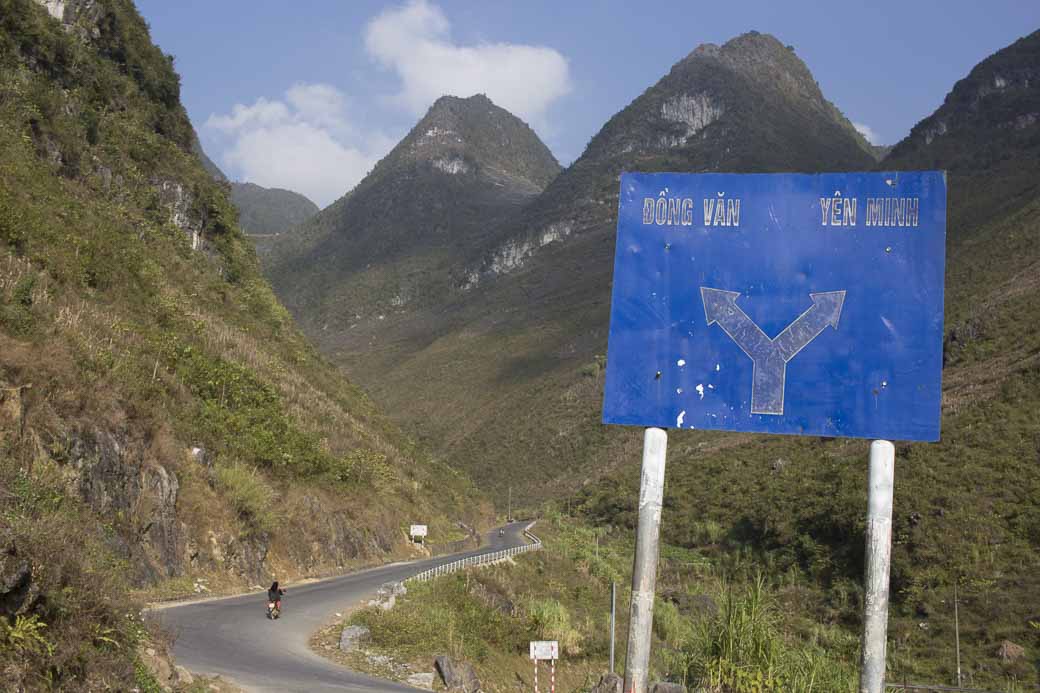 Our day started off well, when we happened upon a chaotic market by the grounds of the old palace near Dong Van. All around us were pigs in cages, dogs about to meet their hotpot destiny and produce ranging from sweet buns to what looked suspiciously like crocodile heads. Yummy. 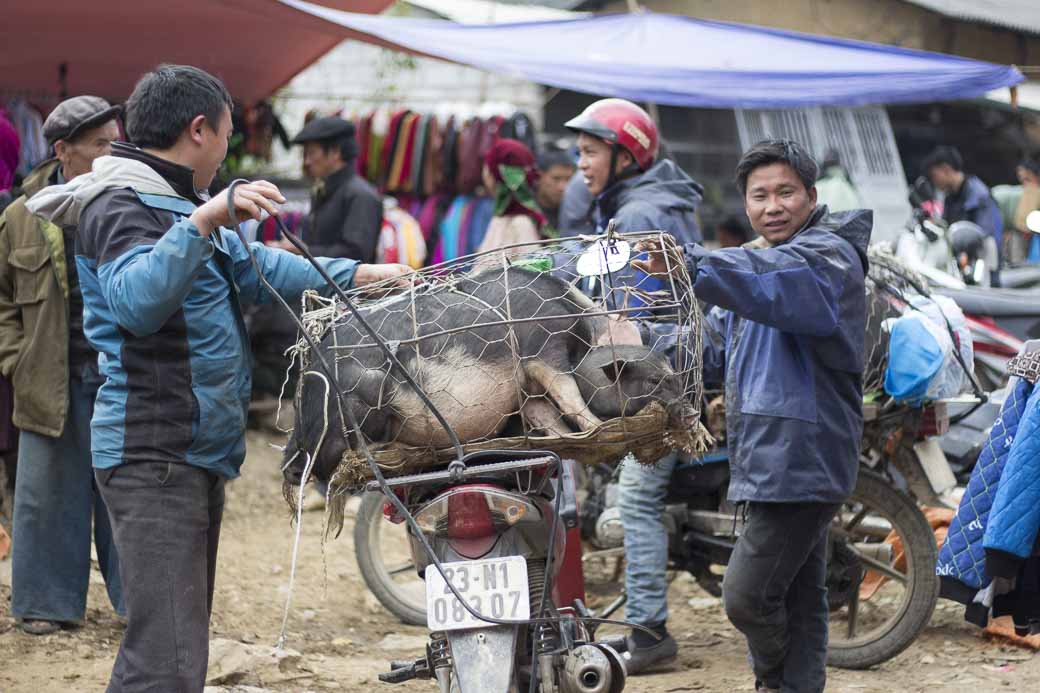 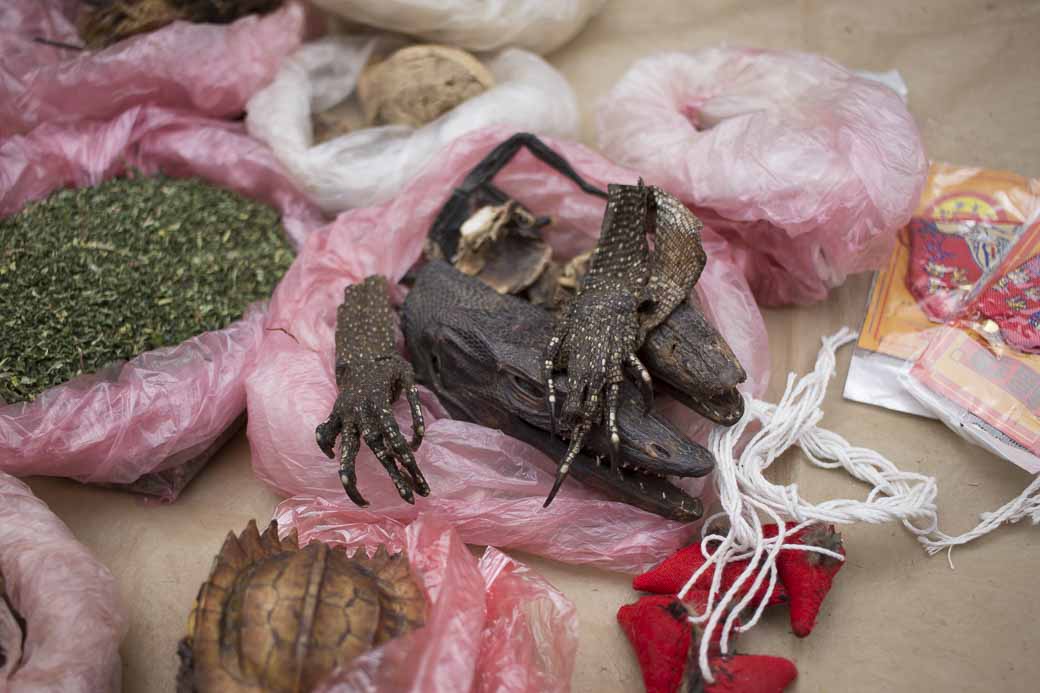 At the centre of the action was an array of colourfully clad older women with weather-beaten faces. 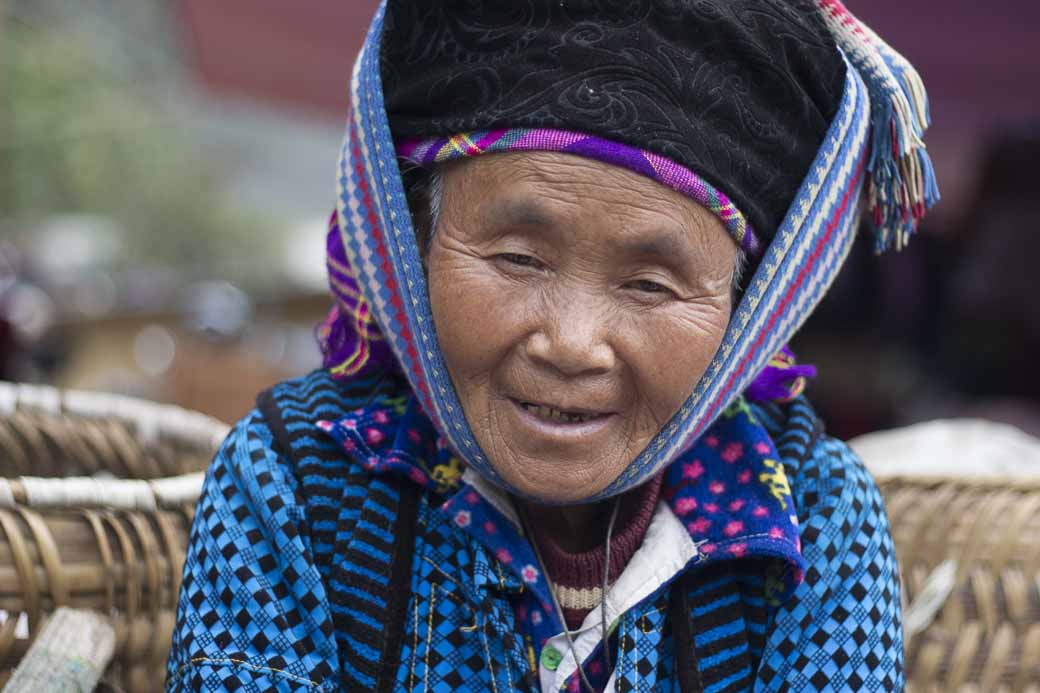 These ladies, from the H’Mong ethnic group, were decked out in the sequinned belts, embroidered headscarves and floral pleated skirts that they made and sold themselves. The contrast was striking between the men (dressed entirely in black or at least varying shades of grey) and theses brightly festooned women, who sparkled and shimmered in their various colours depending on what particular tribe they hailed from. 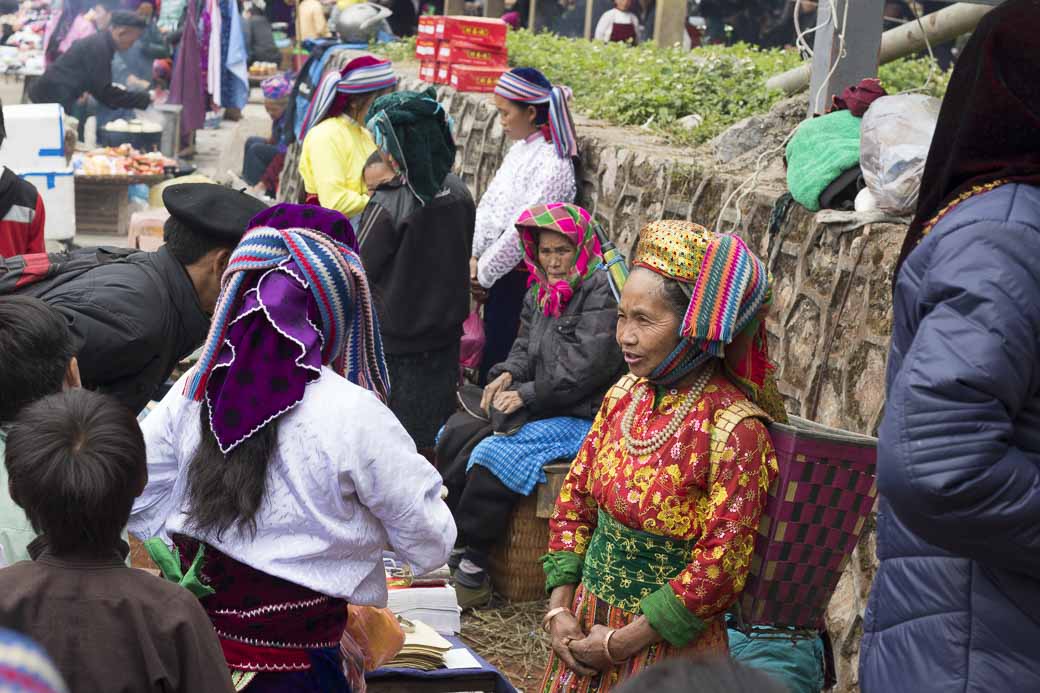 As a person whose motto is “never too many colours”, I was in heaven. Unfortunately, H’Mong women having waists the size of my wrist meant that I would never get to don their wares myself. Sigh.

The whole market was pulsating with life.

Vivid green mountains rose steeply behind for a pleasing visual backdrop while animals being led to slaughter provided a somewhat more distressing soundtrack. 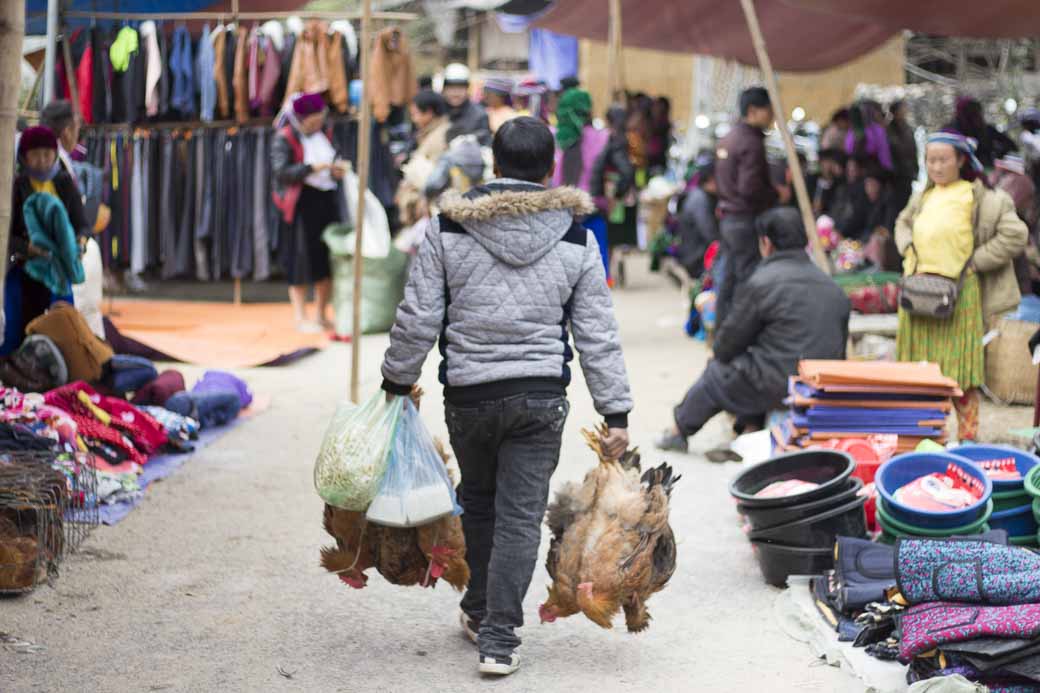 We escaped the madness momentarily to step into the serenity of the old palace; a space that for me was right out of Crouching Tiger, Hidden Dragon. We were but a stone’s throw from the Chinese border, after all. 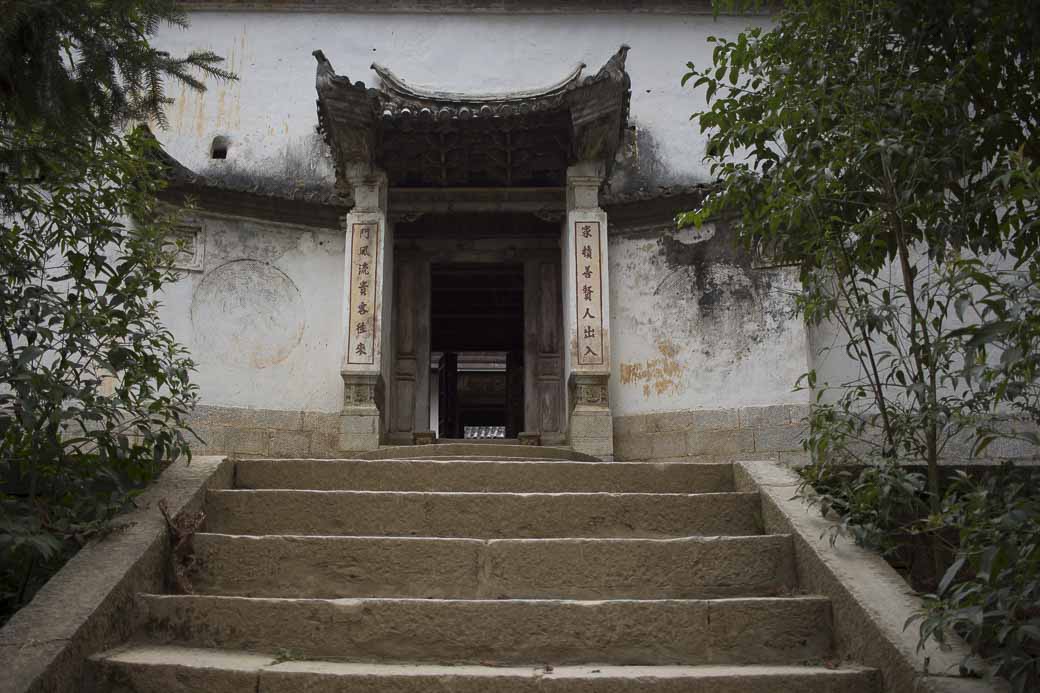 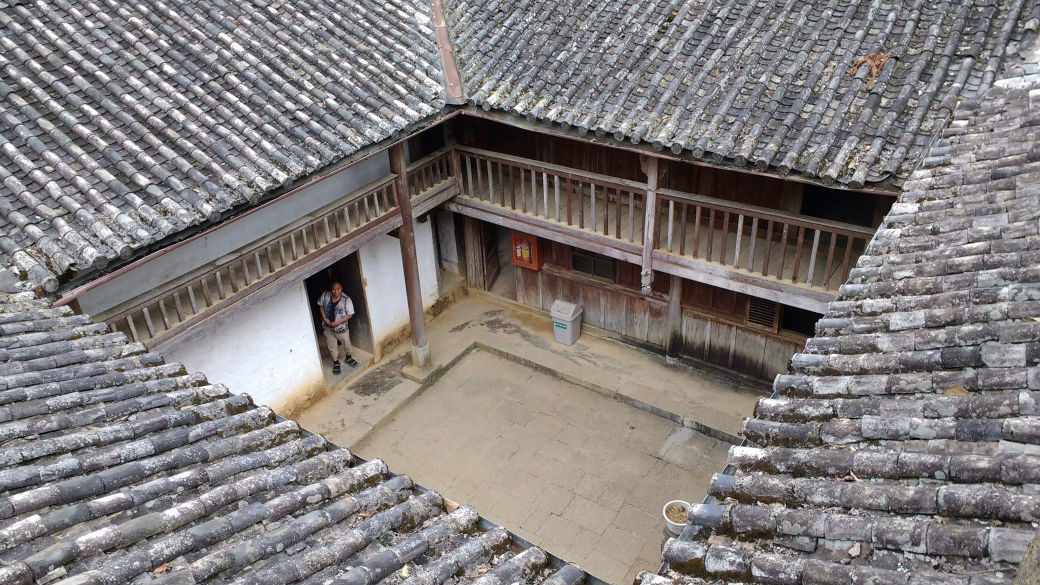 After the market, we continued on the treacherous mountain roads towards Meo Vac. It was incredibly dramatic, with scenery like you’d imagine at the edge of the world…although it was a bit dangerous to look out and appreciate the views too much for fear of those dastardly potholes. 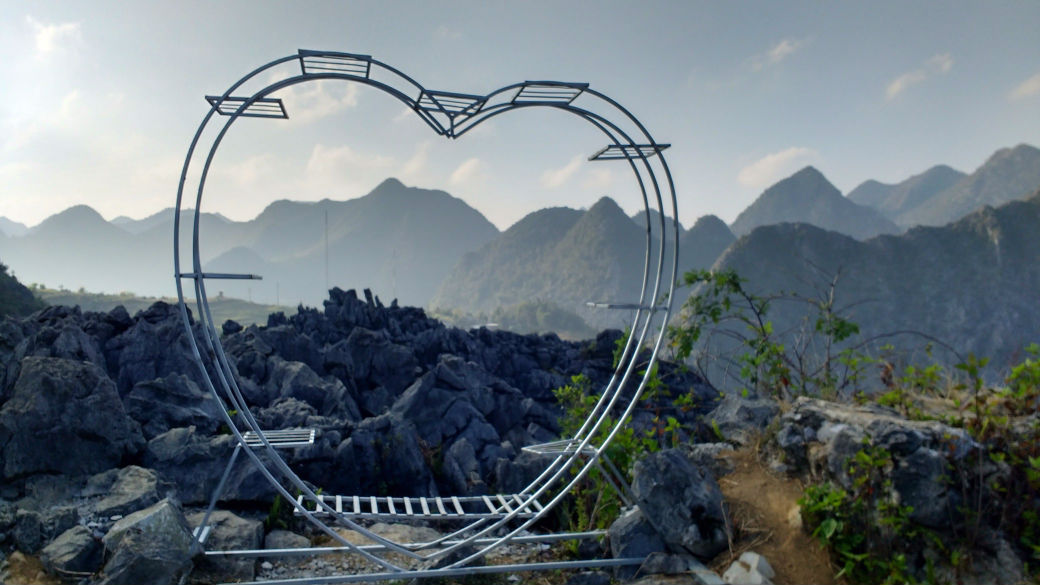 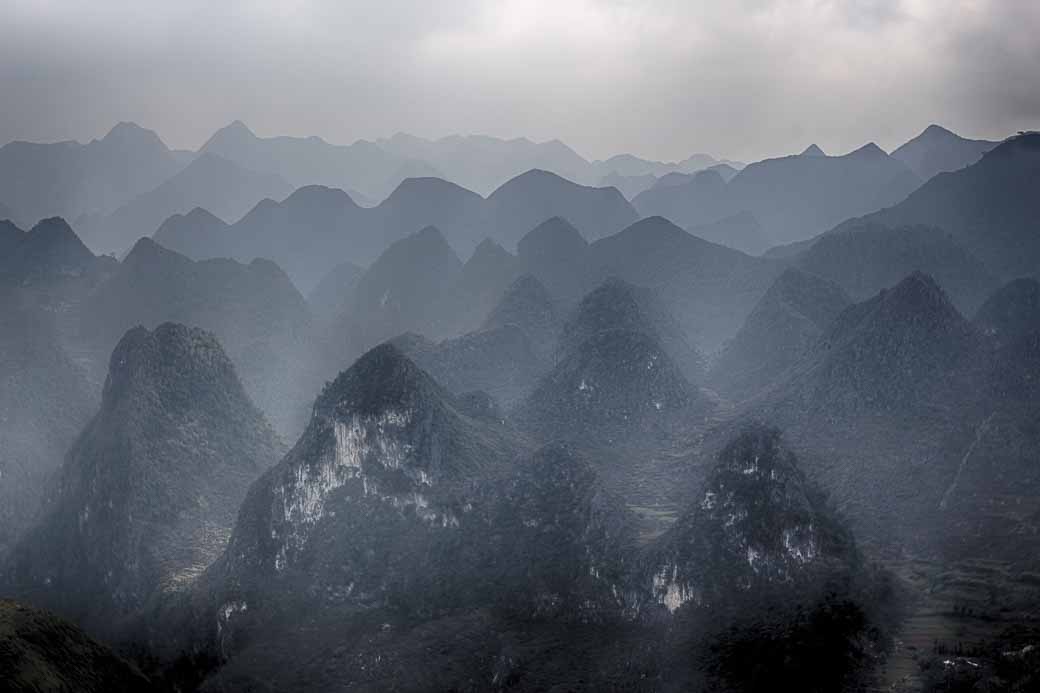 That night we stayed in Ma’s Homestay in Yen Minh (found randomly by following red graffiti arrows up a dirt track – our curiousity was rewarded!) As it turned out, an 11-year-old’s birthday party was taking place that evening so we got to share hotpot with the family and to join the celebrations. 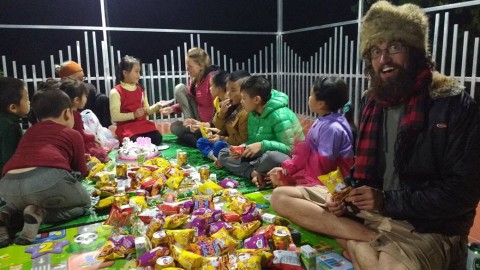 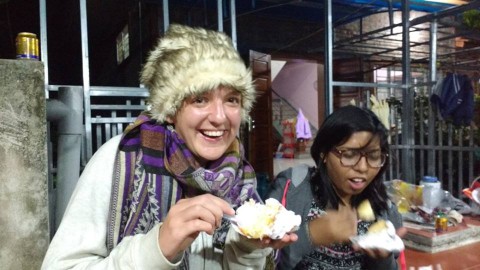 Which was great fun until, hyped up on shots of Red Bull, the kids decided to take it in turns beating us up. They were momentarily pacified by my teaching them “A Sailor Went to Sea, Sea, Sea” but soon cottoned on that the “clapping hands game” wasn’t half as fun as the “slapping foreigners game”. Amazing how quickly you can go from honoured guest to bruised babysitter…

We were supposed to drive all the way back to Ha Giang that day but the weather had other plans in mind. It lashed all day and with mist that curled in so we could barely see 5 feet in front of us, progress was slow. 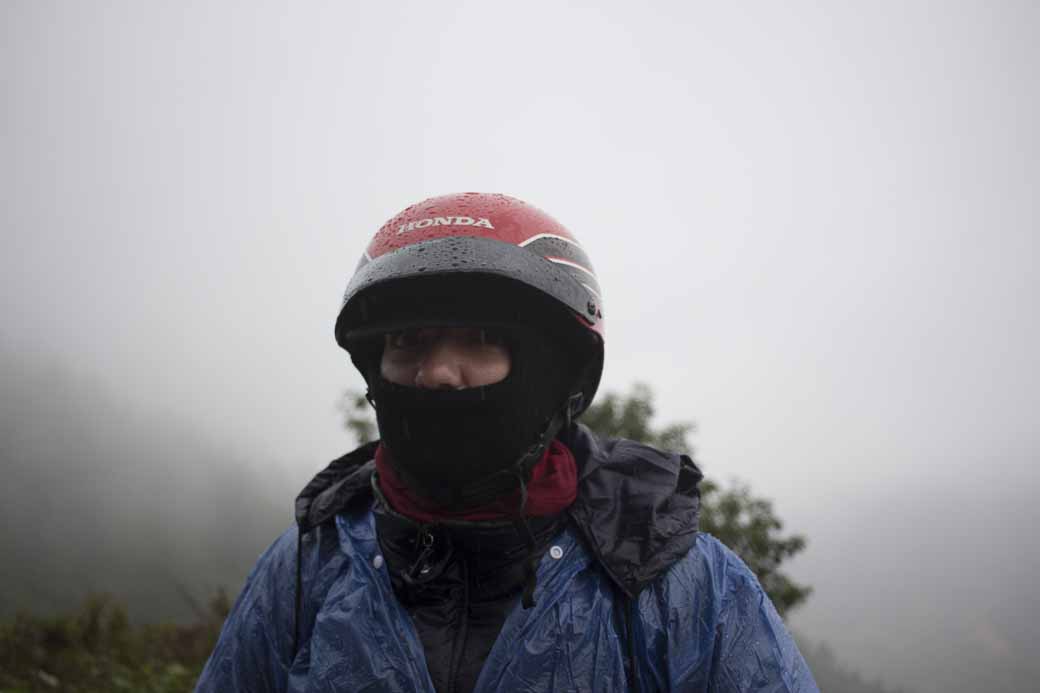 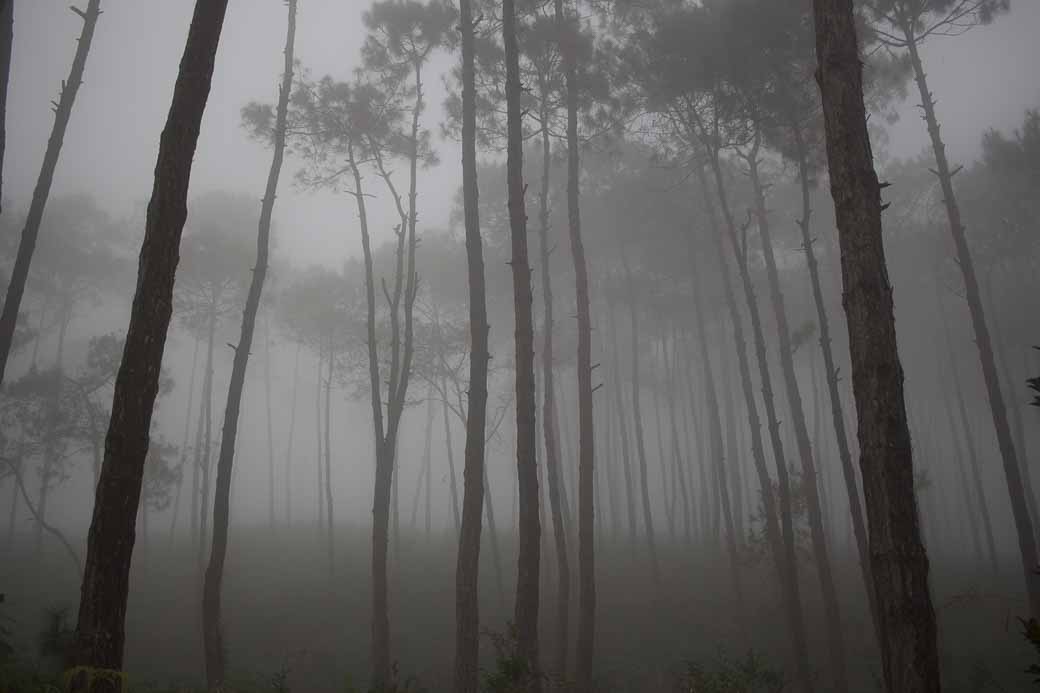 Even with our raincoats, we were soaked through by the time we passed through Tam Son and, lured by the thoughts of a hot shower and cosy blankets, we decided to pay the homestay in Nam Dam another visit. We got a great welcome back from the woman in charge, who immediately ordered her husband to set a fire and fill us with corn wine to help us get rid of the chill! 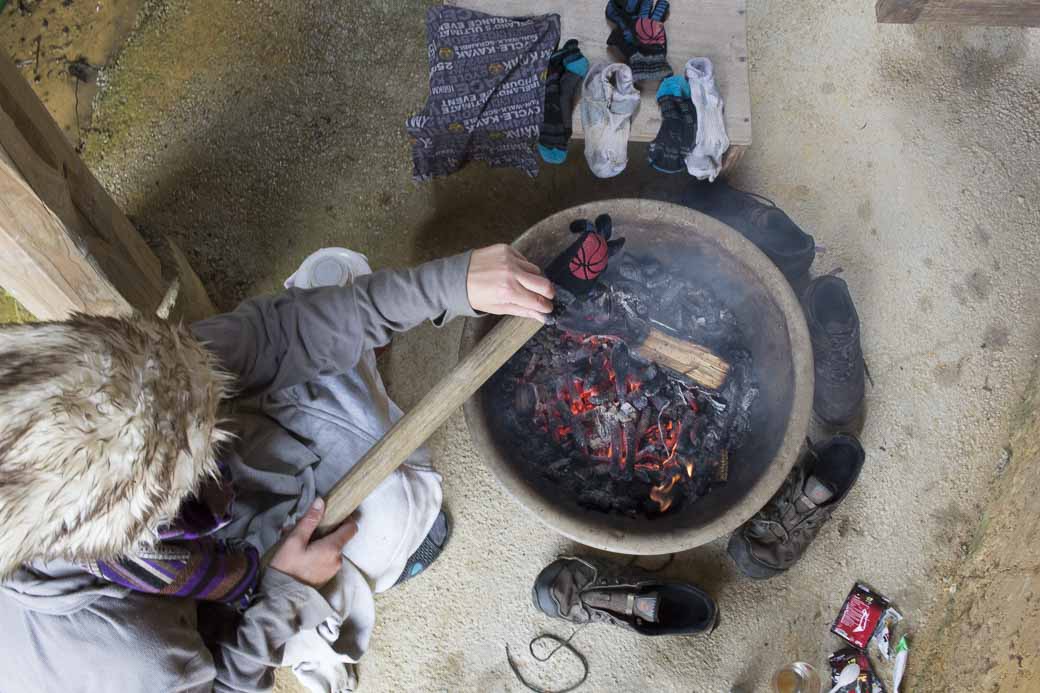 Aside from a minor whoopsie involving my bike careening into a bush at the side of a very steep hill, the drive on our fifth and last day was the most enjoyable yet. Because even with the slippery roads from the rain, the large amounts of mud and the construction work slowing everything down (except those unfailingly mental buses), I felt at my most confident yet.

It was crazy to think how much had changed in just a few days. In fact, it reminded me a lot of skiing. We went from slowly shuffling along to slaloming with the best of them, zipping around the curves of the mountain like we actually knew what we were doing. 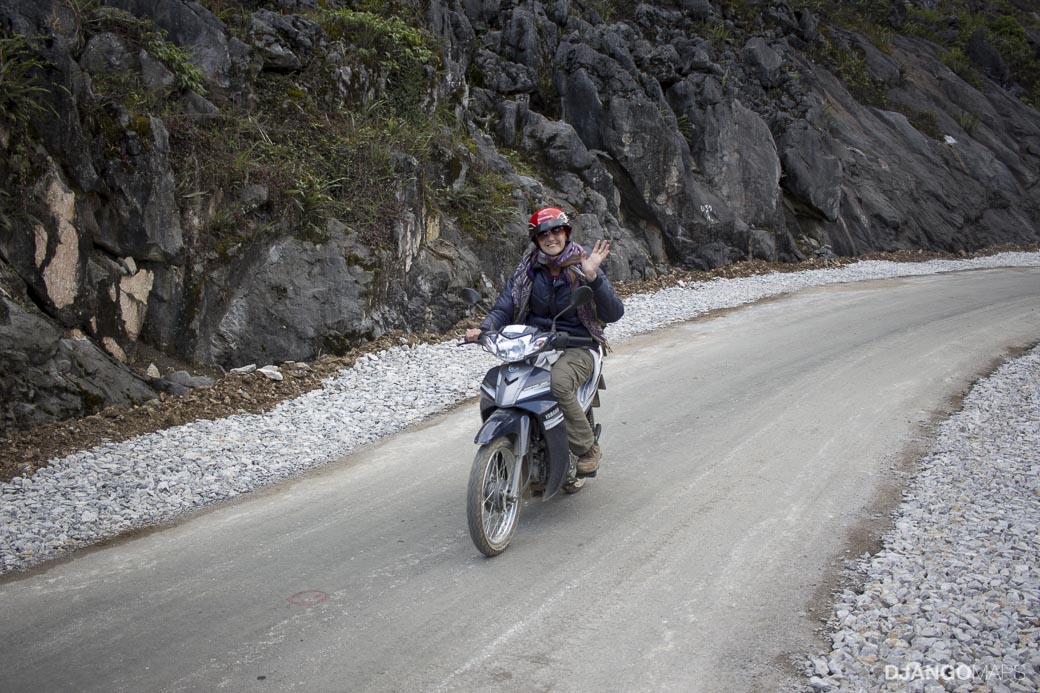 The Dong Van Loop was an incredible experience. And we’re not quite done with it just yet. We loved it and Thon Tha village so much that we’re going back soon to volunteer, staying with Mr. Thien and his wonderful family.

After all, that’s where we started our journey – and it looks like the loop has led us back home.


PS: Thanks so much to Andy Barker (again!) for providing several of the photos in this post. And for having patience with my driving. 🙂